It is a heavy time, the atmosphere charged with beautiful and powerful sunlight here (eastern timezone,Ga). And this subject formulated in my mind over time of about only the past few years and progressive study compelling me more to look into the star/ planet Sirius!

Did you know that Sirius is allegedly “personified” as a wombman, an ancient goddess named Sopdet!?

Well let’s look at the physical evidence and may I set a disclaimer: I do not accept the eurocentric sylloqy that the gods/goddesses(ORISHA) and Neteru were weather and elements and/or figments of imagination. That they were only ideas.

I know that many in the conscious community are accepting this as acceptable explanation for hyroglyphs of what APPEARS to be PEOPLE AS NON-PERSONS. I innerstand the what appears to be cognitive dissonance on the subject. And because of a long programming and misinformation campaign by western science, and anthropology that has misaligned the people of Africa and it’s decendents from the BENEFITS of it’s own wisdom, still hidden!

One such idea is one of personification when relating to these ancient works. Sopdet is said to not be a goddess at all but the star Sirius (also called the “Dog Star”). However, since we are rejecting the personification idea (based on western acadamia long term campaign against accurate translations, the deliberate breaking off of features of these beings (Gods/Goddesses/Pharoahs) which disturbed a proper dissemination of truth) let’s look at the goddess herself, The planet Sirius, and it’s connection to us.

Sopdet meaning “SKILLED WOMAN” is shown frequently in hyroglyphs with a star or star fish atop her long loced hair or (braids) what appears to be a long skirt of scales of some type array in a reptilian pattern, and even has been shown with dark green skin (like the god Asur). Her eyes sometimes without pupils, making her appear otherworldly. She also has a star atop her head or an illumination emanating from her crown. Sometimes shown underwater and standing in a boat(ship) with two plums in her crown signifying her appearance. This is celebrated as the “Coming of Sopdet” and the New Year since the very first Kemetic dynasty! opulent blue a part of her habitat, we can even say, she appears to be a mermaid of some type (I will refer back to this and why it is important).

Not only is this being carefully depicted as a wombman, she ALSO has a MATE (If you believe this isn’t literal….why would they constantly ascribe mates to these beings if they were never beings at all)?? And why a divine pairing?

Her consort “Sahu” was referred to as (The Hidden One) and INCORRUPTIBLE SOUL! Souls are often ascribed to people, right? Above a glyph shows his depiction as a large dark shadow in the DOORWAY (LIKE LLEGBA) and also, not appearing fully human. We know that these beings lived for thousands of years as this is in the Turin Papyrus of the 1st Dynasty.

I’ll leave your interpretation to process all of this as it defys best reasoning. Africans were paying homage to a female being from/representing the planet Sirius. This is when technically (based on western science) they could not have possibly had such knowledge. As the Turin Canon or Kings list shows these gods living and ruling for incomprehensible time frames, once again, into tens of thousands of years of rulership PER GOD/GODDESS! The lending MORE PROOF as to the cosmic connection of our melanin! The Sirius Connection, further landing more proof as well.

Anthropologist Lynn E.Rose states: “According to the Egyptians, Sirius was out of sight for about 70 days each year because it was too close to the Sun to be seen. The figure of 70 days most likely pertained to the latitude of Memphis or of nearby Heliopolis. For a comprehensive treatment of some of the Egyptian sources about the 70 days-especially the cenotaph of Seti I, the tomb of Ramses IV, and the later Papyrus Carlsberg I – see the work of Neugebauer and Parker.

Each July, Sirius would reappear in the eastern sky at sunrise. This was the heliacal rising of Sirius; the Egyptians called it prt Spdt, “the Coming-Forth of Sopdet.” (The Greeks frequently referred to Sirius as “the Dog Star,” but they are also the ones who referred to it as “Sothis,” their rather loose transliteration of the Egyptian “Sopdet.”)

Lynn E. Rose (1994), The Astronomical Evidence for Dating the End of the Middle Kingdom of Ancient Egypt to the Early Second Millennium: AReassessAnthronthroment, p. 241 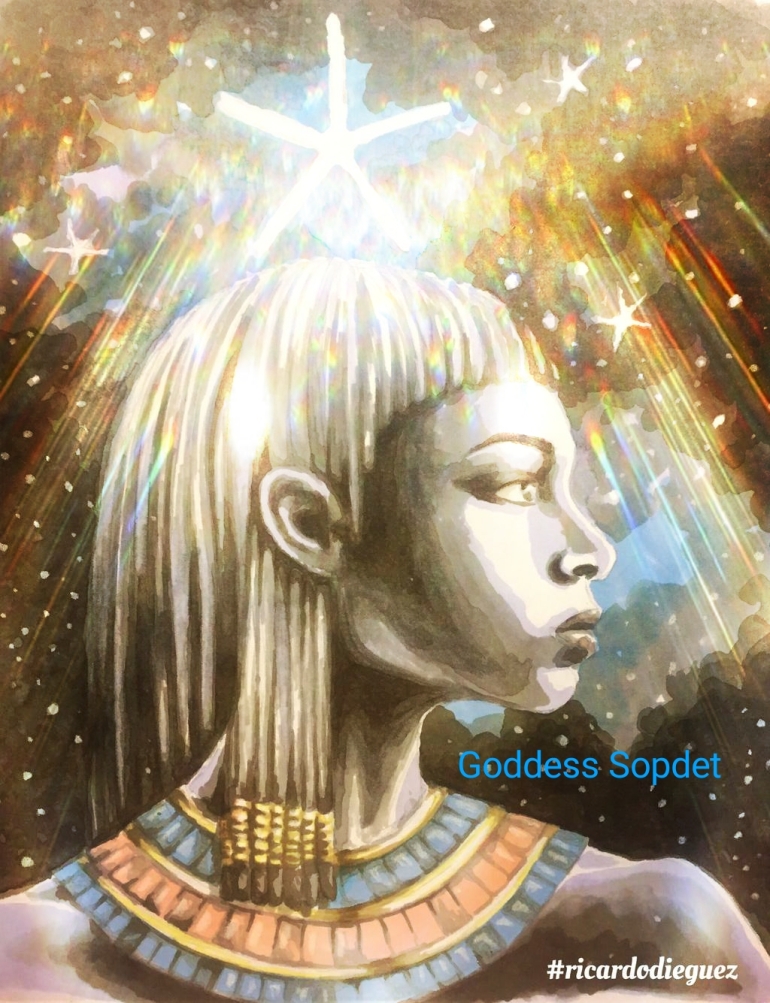 Sahu (hidden one) consort to the goddess, Sopdet.

The further you go into the depth of cosmic knowledge, other planets, and how it all was related to by our ancient ancestors. This idea of beings coming to this planet(plane) and cultivating civilizations is chronic, wherever you find the indigenous, melenated groups. Especially the dominant (negroid) genome which has members and groups claiming ancestry from other planets.

The Dogon is such a group which is actually indigenous to North Africa but later moved nomadically to the Sub-Saharan Cliffs some over 1900 feet over the desert floor (a perfect spot for  landing) over 3000 years ago. This tribe has stated in their oral traditions that beings called the Nommo came down (in a starship). The Nommo also claimed to be from the same planet, SIRIUS!! THIS CAN’T BE IGNORED with the above corrolations. Using left AND right brain function and high reasoning, let’s agree, THIS CORROLATES! https://www.jstor.org/stable/2743641

Also with the (amphibious) OGDOAD creation story of Kemenu (Kemetnu) called by the Greek, Helios or Heliopus.

The Dogon ALSO say the lead Nommo god (amphibian) separated himself to be eaten by humans an act of self sacrifice, was hung on a tree, ressurected, and went BACK TO HIS HOME PLANET SIRIUS!! Is this a precusor for the Holy Communion Ritual ? As most are becoming aware that the Jesus story it a plagerization of the virtue of the life of Heru, also a venerated god!

Also, let it be innerstood how Sirius (not to be confused with Nibru or “Planet X” ) is said to be TWICE THE SIZE of OUR SUN and rotates with another star in it’s orbit, Sirius B. The two locked in a orbit and rotation with another scientists regard as PERPETUAL!! HOW DID THE DOGON KNOW THIS if it’s all just myth?

It gets deeper as the ancestral info has yielded, Sopdet was regarded as a relative or SISTER of AUSET(ISIS)! This is incredible since Auset is one of the most celebrated dieties, her spirit honored and praised for resurrecting her God-husband Asur (Osirus) also a figure with dark green skin!

They both (goddeses) were revered for purity, magic, fertility, courage and great cosmic POWER!

Another group (about 9000 miles away) in the American Southwest is the Hopi Indian native council (shaman) have claimed they originated from dark blue/black interdimensional-like beings who came from the BLUE STAR creating “mankind”! They AWAIT THE RETURN of such beings. Go here to check out the Hopi/ Blue Star Kachina Prophesy >https://www.crystalinks.com/BlueStarKachins2018

This kind of global synchronocity can’t be ignored and can create a blueprint for better communication on the matter, minus an eliteist, racist agenda.

All things considered, we have more searching to do to connect the dots and not erase them. We may find what can help us create a more beautiful, functional world , going forward.